A man on the radio sang, in that plaintive, far-away-train voice of Country and Western : ‘The light at the end of the tunnel is a burglar’s torch.’  That was a good start to the day. How is it that Country and Western music, from the wreckage of marriages, prison sentences, broken families, mawkish love stories, old cars, dogs, drink and lonesome journeys, can so often produce an image that sums it all up so succinctly?  It can also produce joy and exhilaration to counterbalance all the woe. It’s a varied tapestry. I heard about that light originally, as the light of an oncoming train. That’s about as pessimistic as it gets. Maybe there is a C&W song in that too.

There was further news. Tobacco companies are warning that they will seek massive compensation for loss of earnings, if the Minister for Health forces them to put their products in plain packets, with details of the many diseases caused by cigarettes. Burglars, drunk drivers and serial killers, may consider a class action against the police and the Minister for Justice, for unreasonable interference in their activities. As many of them work at night, they could also have a case against the local authorities, for inadequate street lighting. 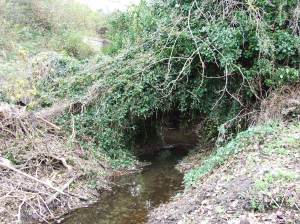 Below the railway embankment, two streams meet, one from the north and one from the south. This is a place of ivy, long grass and white -thorn trees. There were always blackbirds’ and thrushes’ nests there in summer. At evening time the birdsong filled the air. It still does. It was a wonderland for children.  The two streams join together and dive into a tunnel, to emerge as the Mill Stream, on the other side of the embankment. It was the best place in the world for pinkeens and possibly, still is. 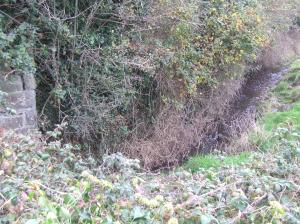 Science calls them minnows. In Tipperary, (a long, long way away,) they are called gudgeons, but they are neither. They are pinkeens. A morning’s work could be rewarded by a two-pound jam jar full of pinkeens. (Health and safety men would not be happy with children carrying glass jam jars.) You brought them home and put them on the window-sill.  The glass magnified them. They went round and round, iridescent, glistening in the sunlight. You could see their insides. Their enormous eyes regarded you accusingly.  You fed them bread crumbs. In the morning they were dead. Their colours were gone. They lay on the bottom of the jar. They hadn’t touched the bread crumbs. Some people are never satisfied.

I always remembered them in my teaching days, during parent-teacher meetings. Most mothers looked like real people, but some came in full war-paint: eyebrows immaculately pencilled in, make-up impeccable, lipstick, mascara, eyeshadow, even false eye-lashes.  At close quarters, it was all a distraction. When they blinked, the eyelids glistened like pinkeens. How is it done? How long does it take? And in a mirror too!  Billy the Kid, reputedly, could shoot fellows over his shoulder, while looking in the saloon mirror, but then, that was his full-time job. The cosmetics trade is bigger than the narcotics trade, but at least, it’s legal. Do you remember Helena Rubinstein?  She advertised her anti-ageing cream, with her own photograph. She was in every pharmacy window, a haughty, wizened, old lady. It didn’t work. She called it Cold Cream. I suppose it was exactly what it said on the jar. Blink!  There they go again.  Ah yes! Of course. Your daughter. English homework. Let me see. Let me see. Hmmm. Very good. Very good. I’m a bit worried about her carrying two-pound glass jam jars. Very dangerous , you know. Are those things stuck on, or is it just the fabulous new volumiser mascara, as seen on television? Don’ ask. It’s supposed be indistinguishable from the real thing.

A little boy of my acquaintance told his mother: ‘Mammy, there are ladies on television who are gorgeouser than you.’   ‘Oh yes?’  She may even have been a bit miffed. ‘But I still love you the best.’ Accept no imitations.

I bought a big fish tank. Better than a jam jar. I put frog spawn in it. Highly illegal. We got tadpoles and tiny frogs. I put in some stones so that these newly arrived amphibians could haul out and laze around on the rocks. They didn’t laze anywhere. They used to jump and stick to the glass.I put a lid on the tank. They were ninjas. They climbed up the sheer surface and disappeared. I have no idea where they went. Maybe they are still in the house, coming out at night to raid the fridge. I got tropical fish, a pump, a sunken pirate ship and some coral. Neon tetras brought flashes of Amazonian glamour to the corner of the room. Cardinal tetras paraded in scarlet robes. Guppies hovered and darted between the weeds. A coolie loach , in a football jersey, hoovered  the algae off the glass, an essential, if not very exciting, task. All was well, until a visitor’s little boy dropped a cigarette butt into their idyllic world. Within minutes they began to fail. The neons flickered and faded, as the joy went out of them. The cardinals became bishops. They became monsignori and then dowdy village curates. They became Greyfriars. They sank to the bottom, among the defunct guppies and the poor old coolie loach.He had to be helped off the pitch. Have I a case against Big Tobacco? It would be no more absurd than their case.

More than sixty years ago, when the streams were low, we used to walk through the tunnel under the railway bridge and emerge on the other side of the embankment.  It was necessary to bend almost double and try not to let the water get into our rubber boots. It was exciting and doubly so, if a train went past, far above, making the tunnel reverberate and echo. We walked, like Quasimodo,  towards the light at the other end, to emerge in triumph from the underworld. I can’t do it now, because I can no longer stoop so low and furthermore, the road has been widened and the health and safety men have put a cage over the exit.

My daughter told me only today, apropos of something else entirely, that she and her friend, Milly, used to mitch from ballet class and hide in a drainage pipe that developers were installing to divert a nearby stream.  They would crawl about a hundred yards to the little disc of light at the far end. The possibilities of what might have happened, make my blood chill, even now, thirty five years later.  Thank God there was light at the end of that tunnel.  Nevertheless, I will have some stern words to say to Milly also, the next time I meet her. Two ballet careers went, literally, down the drain. I earnestly hope they weren’t smoking as well.

3 thoughts on “How low can you stoop? Health and Safety”