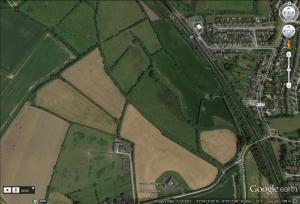 We called it The Guttery Lane. I don’t know if that is the official O.S. name. On the map it is no more than a double line between the corn fields and the low-lying fields on my right.   It was always synonymous with mud and muck. At the height of the heatwave I thought that I could make it, all the way to the end. The ground was parched. I was an early morning lepidopterist, netting not butterflies, but memories. I was no more than a few hundred yards from the railway, but the early morning traffic was merely a distant murmur. It occurred to me briefly that a search party might find me after many days, crawling along, croaking for water. That’s how it works in the movies. I would, of course, have been driven completely mad by the chimaera of a distant mirage. Vultures would be circling overhead. I needn’t  have worried. 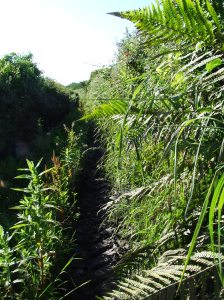 Sometimes it is enough to ramble with no definite purpose. Thoughts and memories rambled with me. I thought of young men fighting through lanes like this, the bocage country of Normandy, exactly seventy years before my morning walk. This would be no country for tank warfare. This would be a place for sudden and deadly ambush. As kids we fought our wars in these fields. ‘Bang!  You’re dead.’  ‘No, I’m not. You missed.’  ‘No, I didn’t.’  ‘Yes you did.’  Our wars were inconclusive. ‘I know where there’s a wren’s nest, in the wall. Do you want to see it?’  I can still see it, after sixty years. Peace broke out. The fields beyond the railway were special. They held the possibility of endless adventure. The lane was a portal to a place of magic.

I noticed the change. This was once a lane for horses and carts. There were two narrow wheel  ruts. The vegetation in the centre was beaten down by hooves. It made it easy for the plodding pedestrian. I walked on, hoping to reach the spring. I brought children there a quarter of a century ago, to look for frogs. The frogs out-witted us. The spring emerges from the high bank on the left and seeps into the lower field on the right. At least, that’s what it used to do.

Tractor traffic has  gouged the lane into two deep ruts, anything up to two feet lower than it was in the past. The water cannot escape.  Halfway along, the track becomes a morass. It more than lives up to its mucky reputation. I could see that cattle could manage to get past, but they have a leg at each corner and no rubber boots to leave behind them in the squelching mud. I thought of the poor soldiers. They hadn’t the option of turning back. If I lost a boot, the young lads of memory would go on without me, to search for linnets’ nests in the gorse on Murtaghs’ Hill, (Murtaghs’ Hill is gone) or put up pheasants in Hatton’s Wood. (Never caught one.) A hare might show them a clean pair of heels on the final  narrow stretch of the lane. That was more than I could do. It was time to retreat.

It was no more than a tactical withdrawal. There are other ways of reaching the end of the lane, but on this morning the challenge was to retrace  the beaten track. It beat me too. There was nothing for it but to have a civil word with the inquisitive heifers and enjoy the profusion of life in high summer. There were butterflies in abundance, but they were not my quarry. There were horseflies and gadflies, but they had not yet got into their stride. They were humming and getting ready for the day’s work.

I came out onto the road. There was traffic. Normal life resumed. It was time for a cup of tea and a look at Plan B. Perhaps a snorkel and wetsuit next time. 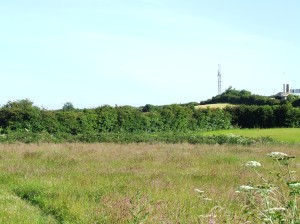 2 thoughts on “A Passage of Time. The Guttery Lane.”