Father Sherwin prepared us for First Confession and Holy Communion. ‘Stick out your tongues,’ he said, ‘and let me see if you have any sins on them. No, everybody seems to be all right.’ We put them back in. It became a game. A bad sin, a mortaler, appeared as a black spot on the tongue. We vied with one another. We used pencil, because we had not yet advanced to ink and dipper pens. We had no biros in those times. Anyway, as I discovered, biros taste horrible. (High-altitude writing-sticks, they were called originally, replacing fountain pens, which tended to burst in aeroplanes. A burst fountain pen is no joke at the best of times, but potentially disastrous, when engaging the Luftwaffe. Well done, Lazlo Biro.)   Haughtons Blue-black ink  is not a great vintage either, but safe enough with a Waverley nib, at ground level.

At seven years of age you have to work hard at finding some decent sins. It transpired that we were all recidivists. We had to keep going back. ‘Ye know not the hour nor the day.’  The sins weren’t anything to write home about. In fact, home would be the last place to write to. The retribution would come more swiftly. No need to wait for the General Judgement and The Last Trump. ‘He that contemneth in small things, shall fall by little and little.’  ‘Contemneth’?  There were two brothers called Little, in the school, Gerry and Kevin, decent lads. I couldn’t understand why the catechism picked on them. I resolved, (it’s an essential part of the process,) to give up contemning. There was a big investigation once, into the burning down of a shed behind the railway station. The culprit was discovered and made to admit his guilt. The Guards were involved. This was serious.  ‘Why did you do it?’ they asked. ‘The Devil tempted me,’ he replied. What do you expect? Isn’t that what they taught us? Case dismissed.

This is the drill. You go into the confession box. It’s dark in there. You get down on your benders. You wait until the priest is finished with the sinner on the other side. You hear the murmuring. It’s a sin to listen to the other sinner’s confession, although it would be interesting. Maybe he would have the same sins as you have. You cough to muffle the sound. You sway gently back and forth, listening to the sound of your knees. Groan, creak.  Maybe it was only the floorboards. You could play a little tune on your knees. Baa,baa, black sheep is a good one to start with.  ‘‘Rattle’. The shutter slides back. You say the prayer and tell your sins, maybe holding one or two back for next week. You get your penance and absolution and you’re out. Made it!

Mrs Corcoran warned us to go down to the back of the church to say the penance. ‘Don’t go into the seat immediately outside the box.’ I reasoned that there was some sort of a beam that came straight out from the confession box. It would cancel out your penance. (Thinking outside the box? I get it now.) You would be damned, without even knowing why. I realised, years later, that it had more to do with traffic management than theology.

There was one boy who was terrified of First Confession. He knew that it was dark inside. That wasn’t the problem. He saw people going into the box and closing the door. It closes almost flush with the wall. He reasoned that there was some sort of force that flattened the sinner, in order to make him or her, fit into the space. It must be painful.  He watched and waited. They emerged after a few minutes, miraculously restored to normal girth. Like many things to do with religion, it’s a mystery. No, it isn’t. There is a sinner-sized adjunct to the main building, outside each confession box. There is a little window, to allow a kindly beam of light to penetrate the darkness. Nothing to worry about, at all, except for the beam that undoes all your good work. 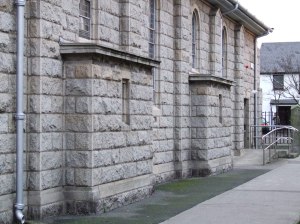 Confession for the First Friday of every month, was mandatory. We went at twelve o’clock, a stampeding horde of sinners, anxious to be the first to unburden themselves, charging down New Street and Church Street, in a mad rush to get it over with and enjoy the longer lunch break to the full.  There was one teacher, however, who did a softening up process first. He described the sufferings of Christ in graphic and gory detail, until you felt faint, imagining the agony and secure in the knowledge that it was all your fault. I remembered him when I saw Mel Gibson’s film, The Passion of the Christ.  Did nobody ever tell tell these people that less is more?

We thundered down New Street, knocking music out of the manhole covers with our rubber boots and hobnailers.  Tonge (Flange?) and Taggart, Hammond Lane Foundries, Cavanaghs of Birr, (the coldest place in Ireland) and of course, James Duff and Sons, Skerries. Each manhole had its own note. Some of them still have. There is one in Convent Lane, that has gone plownkkk  for almost a century. They still do a great job, carrying away our nameless abominations to a dark and noisome place. We read The Vision of Mirzah in school. Mirzah saw a bridge with one hundred arches. A great multitude made its way across the bridge. The furthest arches were in ruins. The roadway was decayed and crumbling over these arches. At random points there were trapdoors that opened without warning, hurling the unwary to their doom below. There were demons clutching at the travellers and throwing them over the parapet of the bridge. It’s an allegory of life. ‘Ye know not the hour etc….’  Thanks a lot, Mirzah. That’s all I need at my stage in life. The manholes stood up to our onslaught. The demons were driven away.

‘And these impure thoughts. Did you entertain them?’ ‘Ah, no, Father, but they sure entertained me.’  I didn’t hear that either.

People will go to Newgrange today, Midwinter Day, hoping to see that kindly beam of light. I don’t fancy their chances. I took these photographs yesterday. After that we ‘tackled’ the utility room, while Paul finished painting the kitchen. He did a great job, covering up forty years’ sins against decor. I made a firm purpose of amendment. Never again will I offend with a can of paint. I asked him to help me remove a dead clothes dryer. ‘No problem,’ he said, picking it up and carrying it away. This revealed a patch of yellow wall that had escaped my attempts with Icelandic Blue, many years ago. In a dim light it looks like a beam of sunshine. I am reluctant to cover it over.

A long time ago I was in the company of a number of politicians. They were enthusing about the introduction of wheelie bins. They were people who held the fate of millions in their hands, arbiters of life and death, and there they were, talking about how to compress your rubbish. I ask you. Well maybe not millions, but a sizeable number of the good people of Fingal. They were  right.  The wheelie bin changed my life for the better. No more cardboard boxes coming apart in the wet. No more plastic bins melting out of shape from hot ashes. No more bandy-legged walks with overloaded and rusty,  metal bins, trailing garbage all along the garden path. The wheelie bin has set me free.

Yesterday I compressed the contents of cupboards and drawers. I dumped old paint tins, half full of fossilised paint; glue tubes with no lids; five thousand curtain hooks; several metres of the wrong strimmer cord, that had escaped from the package, cards from forgotten acquaintances, wishing us a prosperous new millennium; mummified carrots and a sprung mouse-trap with some late Palaeozoic cheese still in it. I applied my ten year rule: if I haven’t seen it for ten years, I don’t want it. There was other stuff that all went into the bin. I was cleansed, nay, cleans-ed. We now have loads of room for stuff that will come in handy at some time in the future, but we must fight against that temptation.

I did hear part of a confession: ‘ I went upstairs, Father. It was down in in Birr. She had only a class of an oul’ chemise on her…’ My old knee trouble kicked in at that point. I didn’t get the end of the story. ‘Baa, baa, black sheep, have you any sins?  Maybe Birr isn’t the coldest place in Ireland after all.

Hey! The sun has come out, after all. Newgrange is looking good.