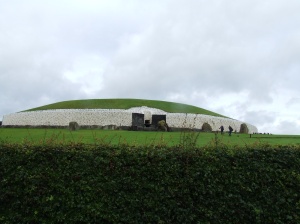 The new bridge at Oldbridge looms out of the rain-soaked trees like a giant. No doubt the old bridge was once new, as were we all at one time. Not far from here the giant, Finn MacCool, tasted the Salmon of Knowledge, caught by the druid, Aenghus. Aenghus spent his life in a lonely vigil by the river, waiting for the wondrous fish. He caught it and set it to cook over the fire. He instructed the boy, Finn, to mind it, but on no account to taste it. Finn complied, but became fascinated by a heat bubble on the fish’s skin. He poked it with his thumb, as any boy would, and burned it. Instinctively, he put his thumb in his mouth to ease the pain and tasted -Knowledge. Forever afterwards he could put his thumb to his tooth and know the answer to any question. He used it sparingly. He had knowledge certainly, but no guarantee of wisdom.

A mile or two away stands Newgrange, half hidden on this particularly day, by drifting veils of rain. It dominates the bend of the Boyne where kings were buried. This part of the Boyne valley is a necropolis, with ancient tombs everywhere, where the living come in their tens of thousands to wonder at the mystery of it all. There is a melancholy glamour to the place. At mid-winter the rising sun sends a shaft of light through the ‘light box’ over the entrance, directly into the burial chamber. What does that signify? What do the carved stones signify? If, like Finn, we knew the answers, the mystery would evaporate. Newgrange would become an exercise in building techniques. It is remarkably dry inside, even after five thousand years or more. Let the experts dig and speculate. I preferred it with its weeds and thistles, as it was when I first saw it. I picked up one of the white quartz stones, strewn all over the mound and contemplated taking it as a souvenir. Then I thought of legends and superstitions and retribution reaching out from the grave. I put it back. Now the white quartz has been assembled into a facade around the entrance. It’s as good a guess as any, although there is a touch of Odeon Cinema about it.

Our young children loved Newgrange, ‘The Hairy House’ because of the grass on top. They rolled down the slope. Try it. It is exhilarating now that the weeds and thistles are gone. Be careful not to bang your head on an elaborately carved stone, or you may become part of the legend. Give your valuables into safe keeping or you may contribute unwittingly to the lost treasure of Newgrange. The tomb was plundered centuries ago, but the plunderers overlooked three quid.

Fergus found the loot behind one of the massive stones in the inner chamber. His attention strayed from the guide’s learned disquisition, as any small boy’s would. He investigated all crevices for treasure and pulled out three fresh green pound notes. He stared at them, his eyes round with wonder. He had a quick look around and stuffed them into his pocket, as any opportunist small boy would, but he could not contain the excitement of it all.

He declared them to me. I explained that we would have to enquire as to ownership. I explained about honesty being the best policy- pompous old fart. I mentioned the matter at the ticket office. Fergus kept a tight grip on the notes. He looked up at me. I know what he was thinking. ‘You’re going to blow it, you idiot. You’re going to blow it.’ The lady in the office smiled. She told him to keep them as nobody had enquired about them. Now that was wisdom. His eyes grew even wider. He relaxed, thinking of Lion bars and ice cream..

That was a profitable day. We called in to Saint Peter’s church to light a candle for Blessed Oliver Plunkett, as you must when passing through Drogheda.. He didn’t look well. He looked like a painting by that merry, laughing fellow, Edvard Munch. The candles had been electrified. The children discovered that for one coin, you could press all the switches and light all the candles, one by one. ‘It’s very good value,’ they agreed. No wonder the Pope made him a saint shortly afterwards.

My little grand-daughter, more recently, told me the story of her pal, Oliver. The bad guys caught him and brought him down to McDonald’s, where they cut off his head. She was indignant. Some dastardly deeds have been done beside the gliding Boyne. She still enjoyed the burger and fries, though.

The Plunkett family knew the soldier poet, Ledwidge. They encouraged him to write and to enlist in the army. He wrote of home and the girl he loved and the blackbird that sang beside the mossy stone, where they met. His white memorial stone stands among thousands of others in Flanders, but his memory lives on.

There is a damson tree in the garden of his cottage near the Boyne. The damsons taste of memories. They taste sweet.