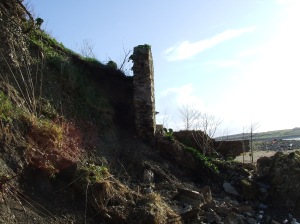 A century ago, this was a cottage. It had a slated roof, a garden and a picket fence. Children played on the strand in summertime. I have seen the pictures… happy holiday-makers returning to Skerries, to the place where their grandfather, Reverend Shegog, was the Minister in the Church of Ireland. You may have seen his photograph, a tall, bearded man in his cork lifejacket, supervising the launching of the lifeboat at the harbour. You may have heard the story of his son, a doctor, who died in the Great War.  A week after his death, a telegram arrived to his quarters, announcing the birth of a child, a child who never knew his father. Old stories, that hang in barely remembered shreds, like the weeds on the crumbling cliff. Perhaps my recollection of the stories, is crumbling too. They echo, like the distant calls of children on a strand, or the cries of the nesting fulmars. Even the fulmars must give some thought to the changes taking place around them. 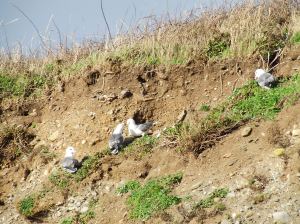 Fulmarus glacialis is the official name. The fulmars have lived here ever since the last Ice Age clothed the rock in boulder clay and fine gravel, to make an island. They live on fish, shellfish and small crustaceans, a gourmet diet. They can’t go hungry on Shennick Island.The Dutch name for fulmar is mallemuk meaning foolish gull. The Dutch are mistaken. The fulmars nest together in apparent amity. They stay together all winter, sheltering from the storms. Their food supply is immediately below them. They glide down to forage and soar back up to their ledges, masters of their element. They warn intruders off, with raucous cries.  Gah, Gah, Gah. 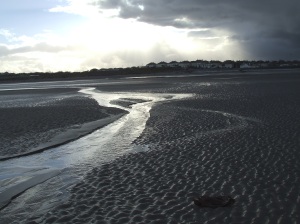 The storms and high tides rend the island. They undermine the cliff. They spill the boulders and gravel onto the strand and sweep it all away. We watch as  the profile changes from year to year. We are concerned. We see the traces of human effort falling away. We experience regret for what is lost. Men stayed overnight in the cottage, to steal a march on the tide, when they went out to collect the woar. The winkle-pickers of today would be glad of four walls and a roof. They come from Latvia. They tell me that they don’t feel the cold. They work at night, with miners’ lamps, moving, like Will o’ the Wisps, on the dark foreshore. 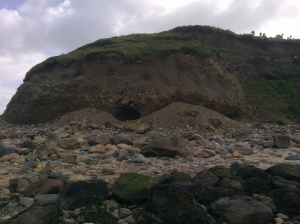 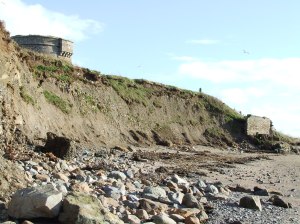 You can read the story of the Ice Age in the layers, the black marl under the sand of the beach, the rough clay and boulders torn from the bedrock; the fine gravel, deposited grain by grain, in the beds of sub-glacial streams. The sea will take it all, the gravel and the jagged stones, sift and sort it and send it somewhere else, to make beaches of fine sand and drifts of gleaming pebbles. Nothing is lost; everything is changed. The granite pillar above the cottage proclaims ownership of the island, His Majesty’s War Office, ‘in Good King George’s glorious day’. The martello tower belonged to His Majesty. He prepared for war. The gulls and the pigeons own it now.  But for how long more?

For the present, the crabs and winkles welcome the shelter of the rocks and stones. The cockles burrow in the mud and sand. The mussels open and close with the tide. The mussel beds suffered greatly in the recent storms, but already the tiny spat is clothing the rocks, like a fine fur. Give them four years and they will make a tasty meal. People will come to dig for lugworms and probe for razor fish. The tide will ebb and flow, undermining and sifting. Gravity will bear down inexorably. The cottage wall will crack asunder. The tower will creep closer and closer to the edge. You and I won’t be around to see it fall.

The fulmars will move back a foot or two, with every slump and subsidence. They will soar on the updraughts and build their nests in the sun. They will dine together in some style. They will not send their children to war. Foolish gulls? I don’t think so. 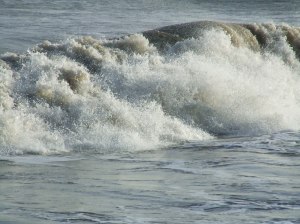 There is a story in one of the sagas, concerning a Viking king and his shipwright. The great new  ship was finished. The king gave a feast in his hall, to celebrate. When he brought his guests outside to admire his ship, he found that somebody had cut notches of varying depths all along the top planks, destroying the beauty of the vessel. He was furious and threatened terrible vengeance on the culprit. The shipwright stepped forward stating that he had done it himself. The king demanded an explanation.

“I was not satisfied with the line,” said the shipwright. “It is good, but not perfect. When I have planed it down to the level of the notches, it will be perfect.”

The king was doubtful but he gave him the time and a stay of execution.  The shipwright set to work with adze and plane, under the watchful eye of his king. When he was finished the line was sublime, a thing of beauty. The king smiled, acknowledging the art of the shipwright. The longship was ready to bring rapine and terror to the coasts and estuaries of Europe and cross the seas to far away Iceland, Greenland and North America. The longship was graceful, sinuous, built to flex with the waves, a dragon ship in every way. A terrible beauty, to use a well-worn phrase. 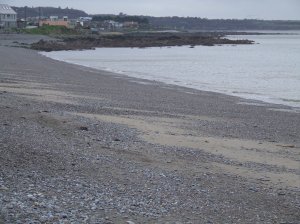 Another saga tells how a fleet from Iceland, sailing down by Faroe and Orkney, arrived at the Isle of Man. The crews discussed an impending war between Sitric, King of Dublin and a great war-chief from the south, Brian Boru. Brian’s reputation as a warrior and leader, swayed many of them to throw in their lot with him. The prospects of pay and loot were better with Brian. There is a tradition that many of the Viking fleet that came to take part in the subsequent battle of Clontarf, grounded their keels at Skerries. It is probable that they landed at the Hoar Rock, where there is deep water right up to the shore, at high tide and safe ground at low tide.

That was a thousand years ago, this year. Imagine the longships gliding to shore, one after another. You can see the men lowering their sails, shipping their oars, letting their vessels surge forward, until they come to rest, with a crunch, on the shelving strand. They would have said ‘strand’ not ‘beach.’  The battle did not result in the expulsion of the Vikings from Ireland. They had been here for two centuries. They had built the first real towns. Their genes persist in the Irish. They accommodated themselves to the new order, if semi-anarchy can be called a new order. Their family names survive: Grimes, Seaver, Mac Lochlainn in its many forms, the son of the Viking. They named what they saw: Water-fjord, Lamb-ey, Skar-eys, Vik(inge)low,Ireland’s-ey. In Greenland they named a fjord ‘Loud shouting’. Can’t you hear their voices echoing back from the cliffs and from the glaciers? In New England—-‘Wonder-Strands.’ In some Irish cities, there is an Oxmantown, an area allocated to the Ostmen, the easterners, after the political changes brought about by Brian’s victory at Clontarf. Brian was not there to see it. His killer, Brodir was pursued for days and weeks, until he was found and killed on Corrin Hill, beside Fermoy.  It is the hill with the tall stone cross at the summit. Brodir was caught on the north side of the hill, a place of accursed memory, where the Sun never shines.

Their cousins appeared in Ireland a century and a half after the Battle of Clontarf, the Norsemen of Normandy. The reverberations of that invasion are still with us, as are their castles and their genes.

There is an old account from The Hebrides, of how the people, Vikings, gave a barrel of ale to the sea every year, in return for a plentiful supply of fish and woar. Until a generation ago, the farmers of Fingal drew cartloads of woar from the island and from the strands, after the autumn gales. There was a ‘woar war’ between the farmers of Skerries and Rush. It had to do with payment to the landlord for every cartload. The Rush men encroached on Skerries strand, without paying the charge. Maybe they were right. The Vikings would have sorted it all out, including the landlord, in jig time. Nowadays, the fertiliser comes in plastic sacks and woar is used to wrap sushi and make cosmetics.

Eric the Red was banished from Iceland, after a dispute over some wooden benches. He lent them to a neighbour for a wedding, as you do. The neighbour refused to give them back. Erik took an axe to him, as you might. There are no real trees in Iceland. Timber is precious. He took his family to Greenland. Leif Ericsson sailed to Dublin to get a cargo of  Yuletide ale for his father. Christmas ale; my father referred to it always as ‘refreshments.’ It is just possible that, on the way back, Eric and his crew sampled some of the refreshments——–because they missed Greenland and found North America. (Italian Americans vehemently dispute this.) They also found endless supplies of timber, a suitable Christmas gift for his father. (We know, of course, that Saint Brendan, the intrepid Kerryman, got there centuries before any of them. America should, by rights, belong to ‘The Kingdom’.)

The ‘sea roads’ joined  the Viking world like a spider web. Skerries is  a dewdrop on a filament of that great web. Kipling caught it well:

‘What is woman, that you forsake her

And the hearth fire and the home acre,

To go with the old, grey, widow-maker?

Doesn’t any large vessel, appearing over the horizon, carry that element of beauty and menace? Be not alarmed. It’s one of ours.