Do you remember ‘your man’, Wordsworth? ‘I wandered, lonely as a cloud.’ ‘Nature never did betray the heart that loved her.’  His life overlapped with that of Charles Darwin. Two ways of looking at things. Natural Selection versus Mother Nature. What mother would subject her offspring to a ruthless contest for survival?  Springtime is the time for weeding out the weak. It is the time when the non-viable fall to the ground, seeds, insects, animals in countless millions. They fall victim to the strong. It is a random world; survival of the lucky. Wordsworth had his head in the clouds. Where is his poem about the plague bacillus or the anopheles mosquito? They are part of nature too. Darwin came closer to the truth. Yet ‘The Nature Poets’ dominate school curricula all over the English-speaking world. Darwin struggles to get a hearing.

In  Disney’s world, the lion lay down with the lamb. Bambi had no genitalia. In his splendid nature documentaries of the Fifties and Sixties, no kills took place on the African plains. By the way, Dumbo did learn to fly. The dancing black grouse were not angling for a mate and procreation. They were auditioning for a part in a movie. Nowadays, nature documentaries are all about killing and rutting…Nature red in tooth and claw. We thrill to the sight of the osprey taking the fish ‘by sovereignty of nature.’  So that’s all right then. Did anyone bother to ask the fish’s opinion? What do the krill tell their children about the vast, cruising, whale, with his constantly open mouth, devouring millions for dinner? Ironically, the biggest trawler on the west coast of Africa in recent years, was an Irish vessel. It hoovered up the shoals of fish in the ocean currents and devastated the fishing economies of the coastal communities. Ironically, because the Irish are the Most Oppressed People…Ever, the MOPES. It’s nature’s way, apparently. Darwin could explain it.

Wordsworthian profusion covered our pear tree. The insects turned up on cue. They queued up in fact, to do their business. ‘for summer hath o’erbrimmed their clammy cells.’ That comes a bit later.  When writing nature poetry, it ith obligathory to thay ‘hath‘.  It’s like prayer. You must use the language of the King James Bible. ‘And birds do sing, hey ding a ding a ding. Sweet lovers love the spring…’ ( King James’s contemporary, the other William).  We thrill  also to the song of the blackbirds, as they go about their murderous trade. ‘Forget the worm’s opinion too, of hooves and pointed harrow pins. For you are driving your horses through the mist where Genesis begins.’ It’s a jungle out there. The Monaghan poet accepts the cost of survival at the expense of others. He mentions dung in his poetry. Wordsworth would never sully his hands with dung. 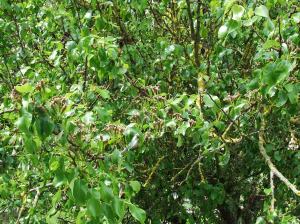 These are the losers and winners. Those not touched by the magic, fall to the ground, their potential cancelled out.  Countless others have ‘struck.’ (Verily, I should say ‘stricken’?) I look forward to devouring them.  It’s a parable. It was a Parable. Look around at the world and think of  the teeming millions whose potential never got off the ground; never even got to the starting line. You are the apex of an evolutionary process that has taken, so far, about four billion years. You have been selected. Now lace up your boots and get out there. Gird up thy loins and do your stuff. (Here endeth the lesson.)

Somewhat sombre thoughts on a morning when the birds are singing. There are ten new cygnets in the Kybe Pond. We must go and visit them today after The Rás. Hundreds of cyclists but only one winner.  He gets a kiss and a bunch of flowers. Well worth the effort. I hope he girds his loins, or they might catch in the derailleur and there would be weeping and gnashing etc. etc.

These little people are intrigued by the spring fall of seeds. These helicopters won’t get off the ground. They will have to wait for autumn and the real Sikorskys, from the sycamores.

I have to admit that I like old Wordsworth.

Oh evil day, if I were sullen.

While the Earth herself is adorning

This sweet May morning

And the Children are pulling on every side

In a thousand valleys far and wide,