See the robbers passing by,

Passing by, passing by.

See the robbers passing by,

(To the tune of London Bridge is falling down…)

I made this drawing from Claes Visscher’s Panorama of London, published in Amsterdam in 1616, the year of Shakespeare’s death.  Old London Bridge was considered the most salubrious place to live, having endless supplies of relatively clean water and the perfect system for the disposal of waste. The road to Kent and the south, passed under an arch decorated with the heads of executed traitors, enemies of the Crown and thereby, of the people. You had to be ‘somebody’ to get your head over Traitors’ Gate.  You were put there as an example to others and as a warning not to do it again, which, of course, worked. Punishment was swift and hideous.  Tradition has it that Saint Thomas More’s head remained incorrupt for many months, probably giving the wrong message about King Henry and his many reforms. A lot of water has passed under the bridge since those days and a great many heads have rolled, on various pretexts. The practice of exhibiting severed heads has died out in what we are pleased to call ‘civilized countries.’  The childrens’ rhyme, however, persists, although the accompanying game has given place to video games and electronic entertainment.  The game, as I recall it, involved linking of arms and attempts to pass through a gate, in time to the chant. It ended with

The Irish writer, Father Peadar O Leary, recalled seeing, in more recent times, three black balls on spikes over the police barracks in Macroom. They were the heads of three 1848 revolutionaries. He never forgot the sight. It was the time of the Great Famine, when one horror was piled on another, leaving an indelible mark on our collective memory.  As a country, we have come a long way since then. We enjoy a standard of living unimaginable to people who live in countries ravaged and plundered by their own rulers or devastated by natural disasters. We live in a democracy, however imperfect; a dreadful system, as Churchill pointed out, but better than all the others. There is a fairly general acceptance of decency and fair play and the concept of sharing. We are far from perfect, but the aspiration underpins our society. It is a less strident form of patriotism. It is the patriotism of those who consider the welfare of others. These patriots don’t wave flags or brandish weapons to demonstrate their love of their fellow human beings. They won’t get their heads on coins or stamps or banknotes. They get on with things.

It is difficult to feel any sympathy for a Russian oligarch, confined to an arctic gulag. These are the people who rifled the resources of their country after the collapse of Communism. They spend their obscene wealth on football clubs and what they call yachts, vast ocean-going liners that dwarf the harbours of the warmer countries to the south. It is equally difficult to feel any great warmth or enthusiasm for Putin. They were the Nomenklatura, the elite of the old system. From time to time, we have had our own shabby, cut-price version of the Nomenklatura, the names, the ‘sound men’.

I was approaching the East Link Bridge, with a car-load of children. I was fumbling for change. I should have planned ahead. Suddenly I was surrounded by the banshee wail of sirens and the thrummm of police motorbikes.  Nabbed, with only one hand on the wheel. Not quite. The policemen gestured the traffic into the side of the road.  A stream of Mercedes state cars flashed past, filled with important people. There was a national emergency. The government was taking to a nuclear bunker, to direct the affairs of the country through a time of crisis. I sat in awe of my betters, until the blue lights dwindled into the distance and the traffic began to move again. I told the children that they had been privileged to see the awesome power and majesty of government in action, at close quarters. They would recount this moment to their grandchildren. They might sit in the chimney corners of pubs in their old age and mooch free pints, in return for retelling the story to open-mouthed yokels.

Not entirely true. It was 1990 and Packie Bonner was about to win The World Cup for Ireland, in Italia . It became suddenly necessary for every patriotic Irishman and woman to rally to the flag and hasten to Genoa.  The cabinet ministers, fortunately, had state cars  and the forces of law and order to whisk them to the government jet at the airport. Had this not been possible, we would have been disgraced before the entire world and maybe, would not have won the World Cup, at all, at all. I remember the victory parade.

We have been going through difficult times. A great deal has been asked of the Irish people. It has borne down hard on many families.  Yet we have not rioted, burning buildings and cars or putting heads on pikes. A little light is being  shed on the incompetence and grubby peculation of some those chosen to run the country and its institutions. We have seen minor treasons exposed.  A few heads have metaphorically rolled. An apology would not be out of place. The Japanese do apology quite well. There is Hara Kiri. A bit flashy, requiring an expensive sword and also a bit messy.  There is the Yakuza chopping off of one’s own finger. As many of our Nomenklatura have been giving two fingers to the public for many years, one or two more wouldn’t be overdoing it. While waiting in traffic recently for the East Link Bridge to rise and fall again, dark, end of year thoughts assailed me. Put the heads under the bridge. Just show them when a boat passes through.  No. No. That would not be civilized, would it? 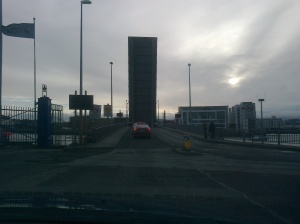 Ali Baba and the Forty thieves

Went to school with dirty knees

But all that they could see,see, see,

Was the bottom of the deep, blue, sea, sea, sea.