On November 1st, we are entitled, even expected, to think sombre thoughts, but all I could think of was William Morris wallpaper. He created patterns from nature— flowers, birds and leaves to delight the Victorians and later generations, until minimalism took hold and emulsion paint, usually magnolia, covered the world. Everywhere I look, on damp streets, polished by the low winter sun, I see William Morris at work. The Japanese, I gather , refer to retired people as fallen leaves, with nothing better to do than mooch around, looking at things, instead of contributing to the world by working and earning money. I tried that. It didn’t work. I like the leaves when they pile up in the streets or blow around in a gale. I should collect them all and make compost for gardeners. There’s probably a fortune to be made there. The Japanese love gardens. I could probably get an incentive grant to export ……… Some other time. 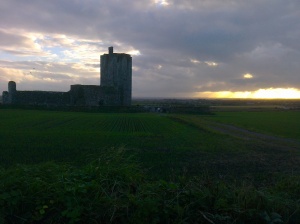 The low sun dramatises everything. It picks out the precise lines of the winter cornfields. The parallel lines converge on infinity. Thanks to Jethro Tull and his seed drill, we can appreciate the weave of next year’s crop, only weeks after the harvest and ploughing. That’s not a sombre thought at all. It is a wonder. It is a gamble also, permitted by our relative benign climate.

There was a Mr Belyaev responsible for corn production in Ukraine and the Russian steppes in the early sixties. The land was ploughed and the seed sown in autumn. It was essential that the seed should sprout before the snow came, so that it would be protected from subsequent frost. Unfortunately the frost came before the snow. They had to wait for spring and the thaw to see what damage had been done. The crop was destroyed. This was not in the script. Mr Belyaev was dismissed in disgrace. Winter in that part of the world, has a way of upsetting the most careful calculations. Cold War warriors rubbed their hands. The Soviets would be starved into submission. They would come to the negotiating table, or whatever. It didn’t happen. They bought great quantities of wheat from America. The price of flour went up sharply on world markets. Our sliced pan became dearer. Not in the script at all. 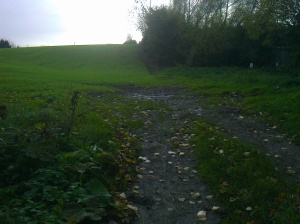 Duffs’ haggart was here. Memories sprout like the green corduroy rows. There were stacks of bales and ricks of hay, where we played and learned to smoke. Probably not the best place to make a hut and smoke Woodbine. Fortunately I never liked cigarettes. Fortunately we weren’t incinerated. I remember a Traveller from a caravan in the lane, taking hay for his horse. He had permission. He smiled and tugged at the stack. “Tis good hee, isn’t it?”  I’m sure it was and gratefully received. We smiled at his accent from far away. There was a great decency in the Duffs.

In the lean-to cowshed against the wall, lived Neddy, a man who had dropped out of the mainstream of life, after some family tragedy. He slept in the straw, undisturbed by the cattle, like an old Viking warrior in his long-house. I wondered why he lived as a derelict. I wondered what had tipped him over the edge. I wondered whether there might be a sense of relief in throwing in the towel and giving up work, ambition, sartorial and hygienic considerations, family concerns, providing for the future, contributing to society and all that rot. He lived as free as the lillies of the field, but not attired like Solomon in all his glory. I felt guilty because we dropped stones on the corrugated roof, when we were going up Toker Hill. Clatter, clank, clank!! It made him shout and swear. It made us run faster.

In the interests of public decency and out of simple goodness, Mrs. Duff gave him a pair of her husband’s corduroy trousers, mole-skins as they were known at the time. She met him on his daily trudge down the Dublin Road. He bestrode the narrow pavement, not like a colossus, but because his legs were splayed wide apart, (an aspect of the original problem of public decency etc.) “Well, Neddy,” she asked, “how do you like the trousers?”  “Ah, missus,” he replied, “me arse thinks it’s in heaven.”  On another occasion, my mother heard screaming on the road outside. She ran out in alarm. My older brother was trying to drag my younger brother back to the safety of the garden. The three-year-old was protesting violently and resisting all attempts to lift him. As small children can, he had become boneless, a dead weight, a marine ribbon-worm, an amorphous lump of jelly….no disrespect to his current self. Neddy had happened upon the scene. He interpreted it as a severe case of bullying. His sense of justice kicked in. My mother restored order. Neddy pointed an accusing finger at my older brother. “That’s a right cur, whoever owns him.” Seventy something years on, my brother is generally regarded as a decent, upstanding citizen. I sometimes wonder though, if Neddy saw something deeper in him, or had he just got the wrong end of the stick.

November is the month of sombre remembrance. Who sowed this crop? These lads are planted in rows as neat as the rows in which they drilled and exercised and stood to attention. Their fates were not as tidy or orderly. They too were mown down, row upon row. It’s recurrence is almost as predictable as the harvest. Statesmen and military men are great planners. ‘ The sower went out to sow his seed and as he sowed, some fell by the wayside…’ Poor old Neddy was one who fell by the wayside. The cares, riches and pleasures of this world passed him by. When Duffs cleared out the shed after his death, the story was that they filled an enamel basin with small change lost and scattered in the straw, evidence of his disregard for worldly goods. The shed is gone now anyway. That retirement home is no longer available. I must mooch on.

November the First. Winter is upon us. It is an absolutely beautiful day. Next year’s leaf buds are on the trees and ready to go. That’s not so bad, is it?