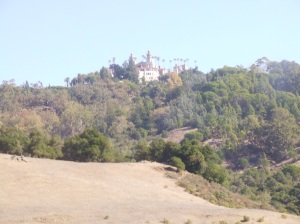 There is an episode in a Will Self novel, if I remember correctly, where a professor of English literature admits at a drunken party, that he has never actually read Shakespeare’s Hamlet. He got a good laugh out of his admission. He may well have won the game, but it destroyed his career as a credible authority on anything to do with literature. Hamlet, for God’s sake! Everybody has read Hamlet. That’s the one where Yorick comes on in Act V sc.iii and slays the bad guys and then exits, pursued by a bear. Et tu, Brute. Powerful stuff. His credibility sifted away like sand in an hour glass. So here goes: I have never succeeded in staying awake all the way through Casablanca or Citizen Kane, invariably acclaimed as the world’s favourite movie or the world’s greatest movie. It is probably because I am a ‘morning person’, bright and attentive as the Sun peers over the horizon but a shambling, zombified wreck by the time a late-night classic arrives to lull me to sleep. Despite the luminous beauty of Bergman or the seismic rumbling of Orson Welles, I always miss the bit in the middle. There is no point in waking up with a mind refreshed by an hour’s snoring, if you miss the bit in the middle. Welles’s camera angles can add to your confusion. I like to catch the tune, though….The woild will always envy lovers….as time…. goes by. It’s probably unfair to suggest that Bogart looks old enough to be tucked up in bed with a nice cup of cocoa, instead of tackling the dastardly Vichy French, or whoever they are……missed that bit. 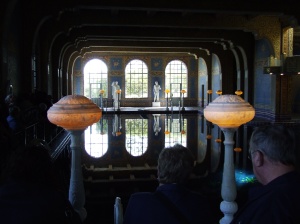 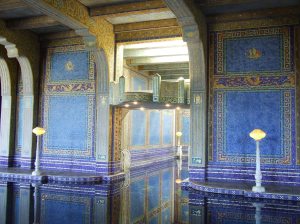 In Welles’s satire on William Randolph Hearst, he had to make do with a fairly bog-standard swimming pool. This is the real McCoy. Welles had no access to San Simeone, Hearst’s mountain retreat. Hearst didn’t like Welles. Why would he? This is a pool to refresh the weary traveller. Those tiles are real gold. We were not invited to have a dip, unlike the Hollywood greats of old.  I think I prefer Hearst’s pool. Charlie Chaplin was the ‘court jester.’ He jestered and capered from morning to night. I would have given him a smack. He had quietened down by the time he came to live in Waterville. We saw Bob Hope’s bedroom !! adorned with painted panels acquired from a mediaeval monastery in Europe. Hearst was an inveterate collector.  There is, of course, a proper outdoor pool. I would have loved to paddle my pilgrim feet in it. This was not encouraged. 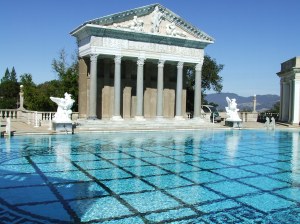 Saint Simeon/Simon Stylites spent much of his life standing on top of a pillar, in prayer and penance, as close as he could get to God. Hearst built his casa blanca, on top of a mountain. Where Saint Simeon amassed a store of grace and credit in Heaven, Hearst amassed ridiculous, unimaginable wealth, in this world, enabling him to build a  commodious home on his mountain. It is a daft place, a jackdaw’s nest of architectural bric á brac from all over the Old World. He was it seems, overawed by the elite of show business, inviting them to his house by special train, at weekends. He insisted on strait-laced standards of personal behaviour. Offenders were banished from his presence. All this costs money. 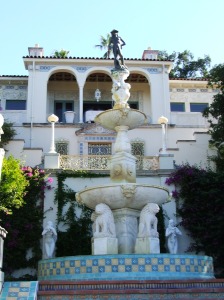 A lady from Trim recently won ten million Euro on the lottery. She attributed her good fortune to the efforts of a deceased relative, acting on her behalf. Well done to all involved. As a long-term member of the Deserving Skint, I feel entitled to ask why my deceased relatives haven’t stirred from their beds of laurel and asphodel to manipulate a few numbers for me. I have done all I can. I have even bought a ticket now and again. Welles found many reasons to attack Hearst, which he did extravagantly, with the certainty and vigour of a twenty-six year old. His version of Hearst is now the received wisdom on the man. If my Lotto numbers come up, I shall make an offer for one of those swimming pools, maybe the one with the gold tesserae. Nobody appears to be using it anyway. Throw in a couple of rain and fire goddesses for the garden and we have a deal. Assuming of course that the odds are kind to me….. 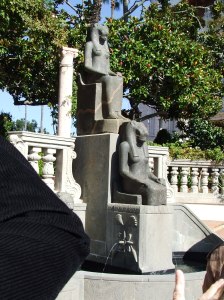 I stayed awake, late one night, against all odds, watching a PBS documentary about the San Francisco earthquake. It appears that Hearst donated a vast amount of money to set up feeding stations for the people made homeless and made funds available for reconstruction. Put that down on the credit side. He probably got more credit in Heaven too than he would have got by standing on top of his mountain, thinking only of himself.  Saint Simeon, in fairness stood on one leg for his last twenty years to increase his suffering and thereby, his store of grace. That’s daft too.

A few miles further south, on a hilltop in Los Angeles, stands The Getty Museum. Comparisons are unavoidable. Both families have been blessed/cursed with wealth beyond measure, but Getty’s centre is family-friendly, free to all and welcoming. It embodies the essence of civic generosity. Google The Getty Centre and take the tour, or better still, go there on the (free) train and be amazed. Walk on the grass (It’s permitted) and see families enjoying this casa blanca on a sunny afternoon. Sunny days are provided, free of charge. Marvel at the collections and be uplifted and indeed, grateful to J. Paul Getty. 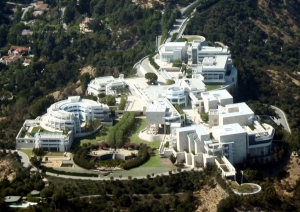