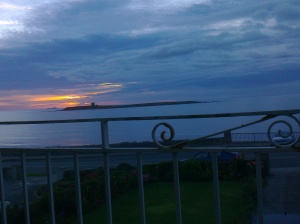 Tom Hoare made a balcony railing for us thirty eight years ago. Wrought iron, shot blasted and rust proofed. It’s almost as good as the day he installed it. I have given it a dab of paint once or twice over the years to fight off the effects of sea air, salt and rain. I like it. It chimes when you strike it in a certain way. It used to be possible to play the opening bars of Blueberry Hill on it, but  the few coats of paint put a damper on that. When we slept in a different room, the railing gave notice of night-roistering offspring climbing over it to avoid detection….boooom..ah… boooom…ah… a soft reverberation that travelled to where we lay. Heh heh. A spider lurks in hiding, his palps gauging every tiny vibration of the web. Gotcha! I’ll talk to him in the morning. He’s home safe. Go back to sleep.

Insomnia gives opportunities to review old and current concerns. I asked Tom to put a bit of a flourish on it. The good people of Verona added a balcony to Juliet’s house. You couldn’t have Juliet’s house with no balcony. The tourists would be up in arms. But soft! What light through yonder window breaks?  It is the east and Juliet is the sun….  ‘We paid good money to see Juliet’s balcony. Didn’t we Ethel? Have to have a bloody balcony…’ I worried about small children climbing over the railing. ‘They can’t,’ said Tom. ‘They’ve nothing to put their feet on.’  It was true. A few curlycues at the top for the spiders, but it has been infant proof for two generations. In the pre-dawn gloom I reviewed a host of worries. I’m good at that. Health, failures, opportunities not taken, finances, jobs to be attempted, offence given, offence taken, political upheavals, wars, the death of the Universe. Then the eastern sky lightened. It was like balm to a bruised consciousness. It happens on most mornings, the greatest show on earth. Roll up! Roll up! I could see the earth rolling towards the light. I could almost feel the vertiginous movement.

Then I saw the Ninja at work. back and forth like a shuttle in a loom. He set stays and braces to steady his web. He tested the tension. Palpable tension, as the cliché merchants say. Round and round he went, in a dizzying spiral, paying out the sticky silk. Why does he not get stuck in his own glue, hoist with his own petard? Amazing footwork. Two feet at the back give forward propulsion; two at the front grab on; two on either side are for ordinary walking. Why then does he not move like a crab? A moth blundered into the structure. It flapped around, threatening to destroy the entire net. The spider leapt out and cut it free. It is very difficult, as you know, to catch a moth. You can buy camphor balls and make your clothes smell like an old teacher in September, trapped in his suit, timetable and syllabuses ( syllabi ?) You can buy cedar balls and hurl them at the moth, but he will munch on happily through worsted, serge and even Donegal tweed. The Ninja repaired his web and waited like a true fisherman.

I thought of friend remembered not and benefit forgot…I thought about the countless millions of creatures even then, stalking their prey, in undergrowth, at water holes, from the air, on the world wide web, in early morning meetings in boardrooms, the hunters  and the prey. The Ninja took a wandering fly, a creature almost helpless in the light breeze.He sprang upon it, delivered the coup de grace and immediately began to wrap it in silk, to be enjoyed later. He rolled it with his forelegs and palps, tucking it into a neat parcel. There was a pretty girl in Bewleys of Westmoreland Street, a lifetime ago, who wrapped bags of coffee in little brown paper parcels and tied them with string. I watched her fingers. I was entranced by her dexterity. I really wanted to say something charming, something to ensnare her in a web of eloquent compliments. ‘ I really admire your dexterity.’ Maybe not. ‘ I love the way you loop the string and snap it with a flick of the wrist.‘ I have never been able to do that. Butchers were able to do it, even though they had knives enough. Grocers could do it. I said nothing. Flick! ‘There you go, sir,’ she said, smiling. ‘Three shillings, please.’ I was cut adrift. I blundered away like the moth. Why did I remember her at that hour of the morning? Tom Hoare told me that he trained as a blacksmith down in Westport. ‘I came up here in 1941, the year of the foot-and-mouth.’  That was the year of my birth, a few hundred yards up the street from where he worked amid the clangour of steel and the blaze of welding torches. I am possibly the last survivor of the variant disease of foot-in-mouth. Probably better that I didn’t release my eloquence on the pretty girl in Bewleys. I went away with my coffee, Kenya Coarse Ground and a vague feeling of inadequacy.

The light intensified. It insisted. I began to count some blessings. One: the Ninja was outside the window. Two: no infants have fallen through the railing so far. Three: I had some stitches snipped yesterday by a doctor with nimble fingers, after a successful operation. Four: I actually feel pretty good. Five: the beloved occupants of the house are still sleeping peacefully. It might be time to put a dab or two of Hammerite on Tom Hoare’s handiwork and maybe get another thirty eight years out of it.