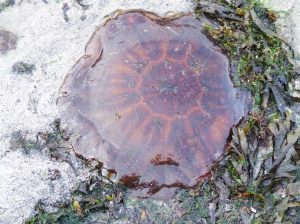 What immortal hand or eye
Could frame thy fearful symmetry?
(With all due respect to William Blake.)
It looks like the face of a grandfather clock. Twelve points. It is as translucent as amber. It lies seemingly helpless, on the beach. Small boys wreak vengeance on it with rocks and sand but, even in this inert state, it can sting. Any fragment cut off from the parent, carries on its work. It waits for the tide to lift it and grant it motion. It goes about its business again, drifting on the current, rising and falling on the waves, trailing its mermaid’s-hair stingers. In a world partially obsessed with aliens, zombies, vampires and serial killers, this fellow is the real deal. Sherlock Holmes in The Lion’s Mane, solved the mystery of the body on the beach. The man’s dying words were ‘the lion’s mane!’ Rather poetic in the circumstances. In a modern context he would have said.’**!!!****+&***** jelliers’.

You don’t have to be a super detective to know that this creature is trouble. It looks like a trouble-maker. It is ugly, when seen in the water. Obscene, shapeless appendages hang below the graceful, pulsating dome. White threads trail behind. It seems to know where it is going, mainly the favourite bathing places. It brings alarm and despondency to a summer’s day. In some circumstances its sting can kill. At the very least, it can inflict hideous pain, a pain that drains all joy from the world.

It is always worse than you think it will be. When you feel the soft caress of the mermaid’s hair you think: ‘What was that?’ Like Wile E. Coyote running off the cliff, the mental process takes a nanosecond to catch up on reality. Yes, you have been stung. There was a man down south who trained for long distance sea swims, by stinging himself with nettles. Always prepare for the worst. Swinburne, another poet, enthused, when he was at Eton, about the bracing effects of a swim after a good flogging. Nothing like a public-school education. However, if you are a seeker of true pain, the brown jellyfish will satisfy all your needs.

Skerries is, to some extent, shaped like a coat-hook. The tide carries jellyfish onto the north beach and into the harbour. The south beach may escape for a time. But the tide ebbs and flows. The jellyfish sneak around to the other side to catch the unwary. Any sea swim that goes around the Head will run the gauntlet of swarms of these wretched creatures, as they cruise the tidal stream. Races are postponed until circumstances improve, until the economy picks up, until global warming reverses and world peace prevails. Might as well go to the pub and wait for better times.

To paraphrase Winston Churchill’s ungallant retort to the lady who accused him of being drunk, it is some small consolation, vis a vis jellyfish, to know that the sting will be better in the morning, but the jellier will still be ugly.
Did He smile, His work to see?
Did He Who made the lamb, make thee?
It’s a fair question, William.